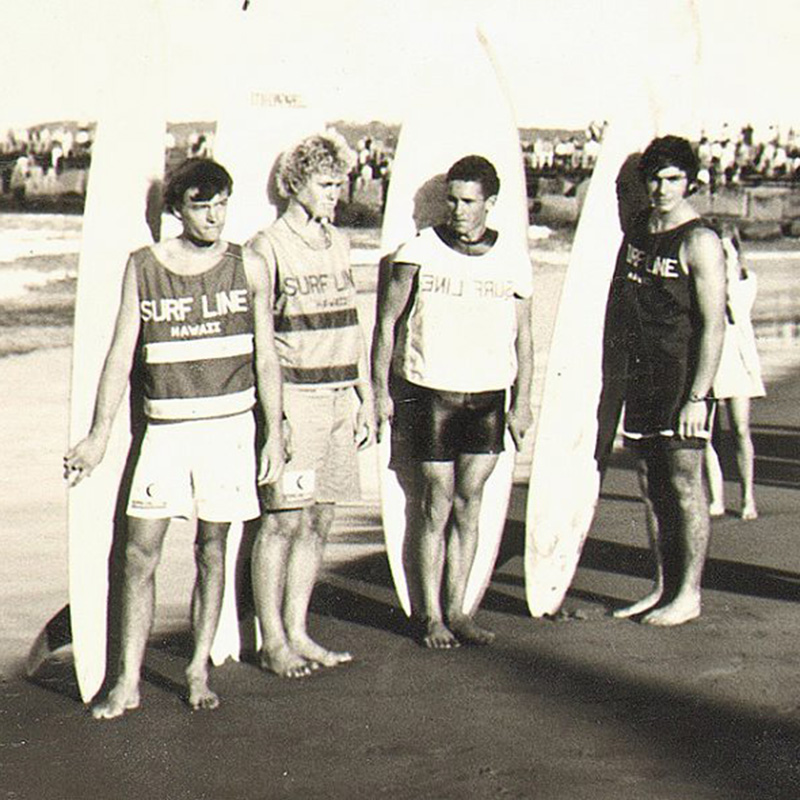 The Ballito Pro presented by O’Neill is the world’s longest running professional contest and will celebrate its 51st edition at Willard Beach in Ballito in 2019. The storied history of the event spans the worldwide growth of competition surfing and features most of the sport’s premier performers.

First run in 1969 at the Bay of Plenty in Durban, the event was named the Durban 500 by its founders, Max Wetteland, Ian MacDonald and Ernie Tomson. They invited 1965 World Champion, Midget Farrelly from Australia, to compete in the event which offered a first prize of R500 with a motor-bike for the runner-up and a HiFi set for third place. In a major upset, Port Elizabeth teenager Gavin Rudolph took home the cash with Durban’s Willy Sills second and Australian Alan Blythe in third place.

Durban businessman Peter Burness, the Secretary of the Natal Surfriders Association at the time, took over the running of the 1970 event and he went on to grow the event into one of the world’s iconic surfing tournaments until he passed away in 1999.

1971 saw the name changed to the Gunston 500 and the event moved to Nahoon Reef in East London where it was won by Brad McCaul (USA). Burness’ vision to invite the top international surfers to compete in SA in order to get invitations for SA surfers to compete overseas started to pay off when Rudolph was invited to compete in the Smirnoff Pro-Am in Hawaii. The then 19 year-old shocked the surfing world by beating the world’s best in 10 foot surf at Sunset Beach, becoming the first SA surfer to win an international event.

Hawaii’s Jeff Hakman won the 1972 event back in Durban before Durban local Shaun Tomson, the son of co-founder Ernie Tomson, won the first of his six consecutive titles in dominant run from 1973 to 1978 that has not been matched by any surfer nor at any pro surfing event since.

The worldwide growth of the sport during the 1970’s saw the Gunston 500 included in the inaugural International Professional Surfers (IPS) circuit started by frequent SA visitor Randy Rarick and fellow Hawaiian contest organiser Fred Hemmings in 1976. Tomson’s fifth victory in the event contributed significantly to his crowning as the 1977 World Surfing Champion.

By the time Dane Kealoha (Hawaii) finally put an end to Tomson’s phenomenal victory run in 1979 the event had become a major mid-year attraction on the South African sports calendar and was attracting fields of 50 or more international competitors who were coming from as far afield as New Zealand, Australia, Japan, Europe, the UK and North and South America.

Australians dominated the results after Kealoha’s triumph, winning every event from 1980 until American Brad Gerlach secured the first of his two titles in the boycott affected 1989 edition. The Association of Surfing Professionals (ASP), headed by Ian Cairns, had become the world controlling body for professional surfing in 1983 and they continued to sanction the Gunston 500, leaving the decision on whether or not to compete to the surfers themselves. 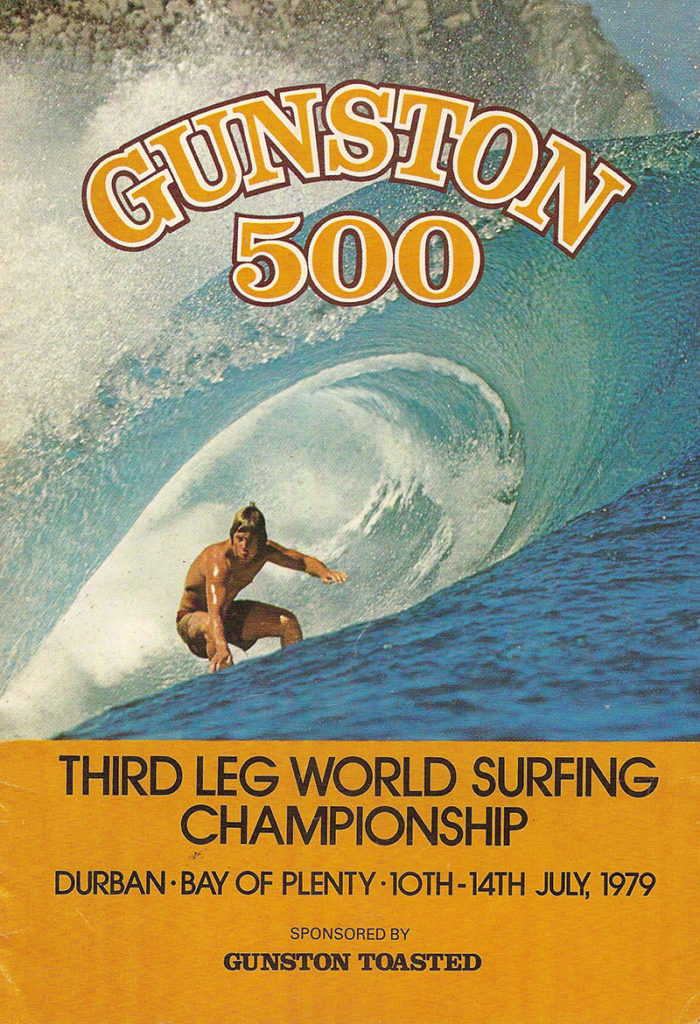 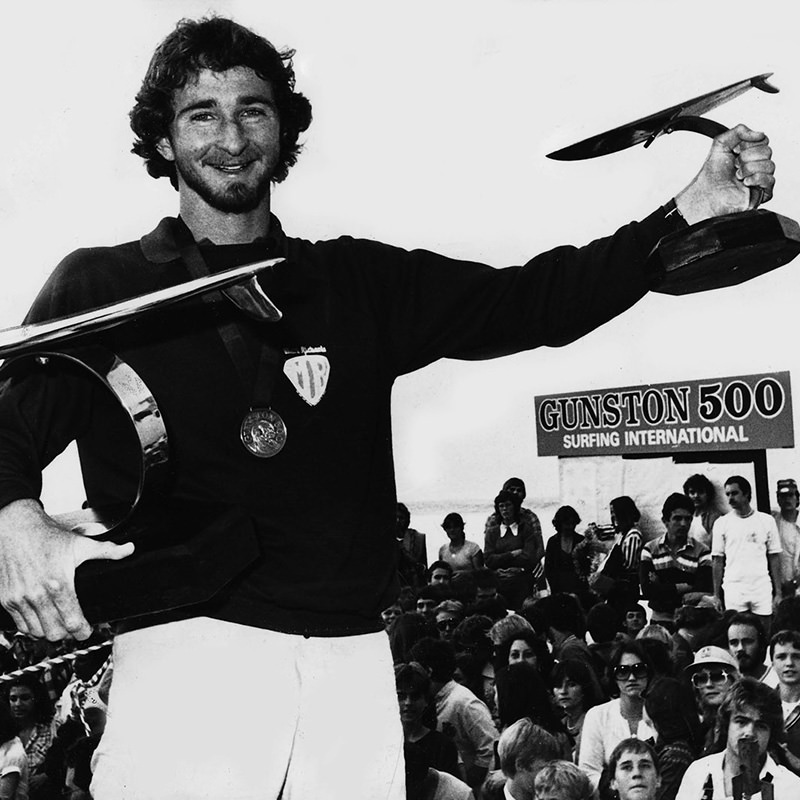 Gunston continued to back the event despite several high profile surfers deciding not to attend and with SA surfers being denied visas for a number of countries that hosted ASP events, the ranking points and prize-money they could earn in home waters were invaluable.

The sports boycotts were resolved with the release of Nelson Mandela in1990 and when the ASP implemented a two tier World Tour structure in 1992, the Gunston 500 became one of the 11 elite World Championship Tour (WCT) events that decided the annual World Surfing Champion. WCT events had to include a women’s contest and despite Gunston’s macho image, the company stepped up to the plate and Neridah Falconer (Australia) became the first ever Gunston 500 Women’s champion.

The early 1990’s also saw the first serious moves to ban cigarette advertising and with Gunston’s annual sponsorship of surfing now exceeding R1 million, Burness and contest director Paul Botha came up with plan to create a festival around the event that would attract sufficient funds to ensure its survival if Gunston had to withdraw.

A marquee tent housing exhibitions of surfboard shaping and surf manufacturers’ merchandise in the car park at North Beach in 1992 grew into a dozen exhibition tents on the boardwalk and 11 additional sports events, ranging from lifesaving, jetski and inflatable racing, volleyball and even night surfing, tripled the number of spectators attending what the organisers named the Ocean Action festival in 1993.

While the Gunston 500 remained the anchor event of the festival, drawing more people and media attention than any other aspect, the diversity of Ocean Action grew until it stretched across more than kilometre of beachfront, from New Pier to Bay of Plenty, with four event control towers and ‘stadium’ surrounded by seating on three sides on the sand.

By 1997 the 10 day festival was hosting more than 40 different activities and attracting people from every walk of life in what the University of Natal Westville termed ‘more than one million people visits’, making it arguably the biggest beach event in the world at the time and spawning similar festivals at Huntington Beach, California, in Australia and Europe. 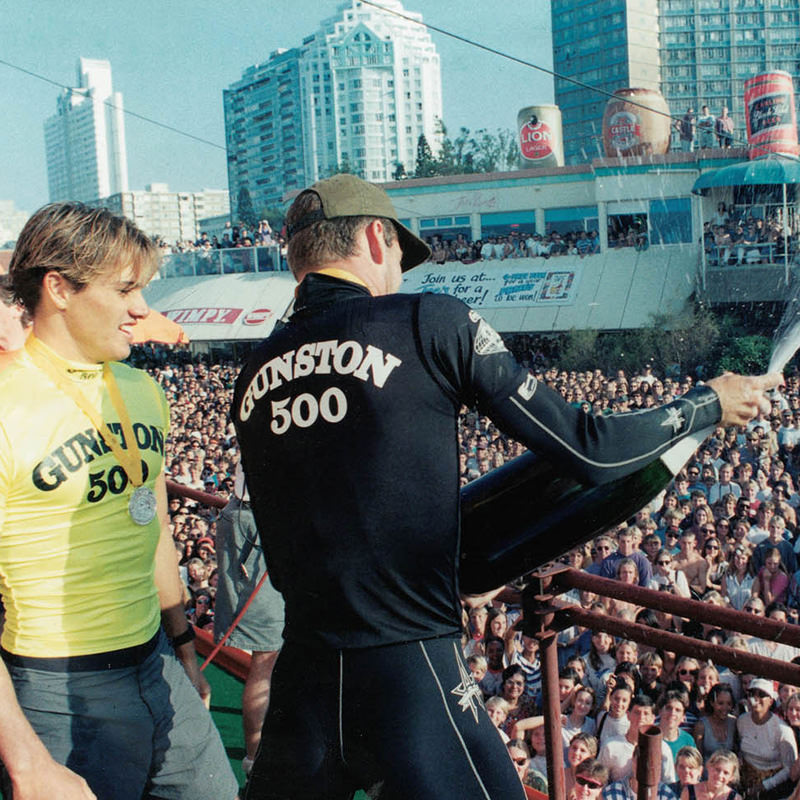 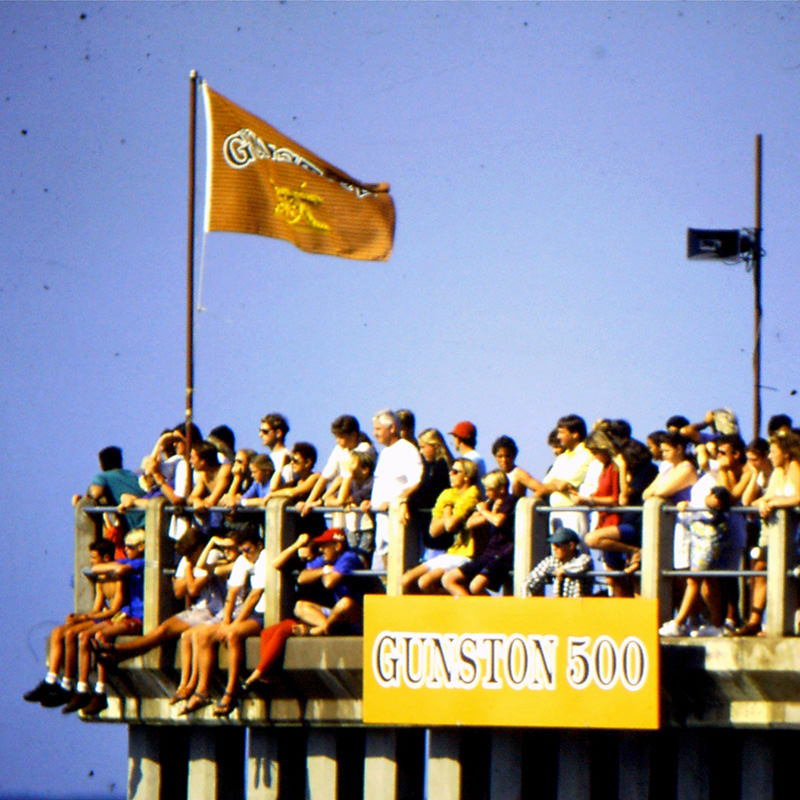 After two years it became apparent that the WCT status of the event was a disadvantage for SA surfing as only two or three locals qualified to compete in the elite 48 man field. In 1994 the Gunston 500 became a 5 Star rated WQS event that had unlimited entry and provided the highest ranking points for those South Africans hoping to qualify for the WCT.

A consequence of this was that it was no longer mandatory to run a women’s event. But Gunston decided that they would continue sponsoring the world’s best women surfers as their athletic ability and good looks were drawing plenty of male spectators to the event!

By the end of the decade legislation to ban tobacco advertising was passed and the 30th and final edition of the Gunston 500 was run at North Beach in 1999. Burness passed away soon thereafter and the Ocean Action festival also ceased to exist.

The new millennium kicked off with Mr Price picking up the reins of the US $100 000 (then R670 000) men’s and $25 000 women’s surfing events and enhancing them dramatically. Under the dynamic leadership of Red brand manager, Greg Swart, the Mr Price Pro produced impressive infrastructure, wall to wall branding and introduced free music concerts on the sand featuring the country’s top live music acts that brought spectators flocking to the Durban Beach Festival.

Featuring fields of 200 or more men and 50 to 60 women, the Mr Price Pro ran at North Beach until 2008. Durban’s Travis Logie had the locals cheering in 2000 when he became the first SA surfer to reach the final since Michael Burness in 1986. Ricky Basnett from the Bluff went one better in 2006 by becoming the first SA surfer to win the event since Shaun Tomson in 1978.

A dispute over permissions to stage the music festival on the beach in 2008 resulted in Mr Price searching for alternative venues for the event. Significant support from the KwaDukuza Municipality and the opportunity to run the surfing in world-class mid-year waves 45 Kms North of Durban, saw the contest moved to Ballito in 2009, with the music festival staged at Salt Rock. 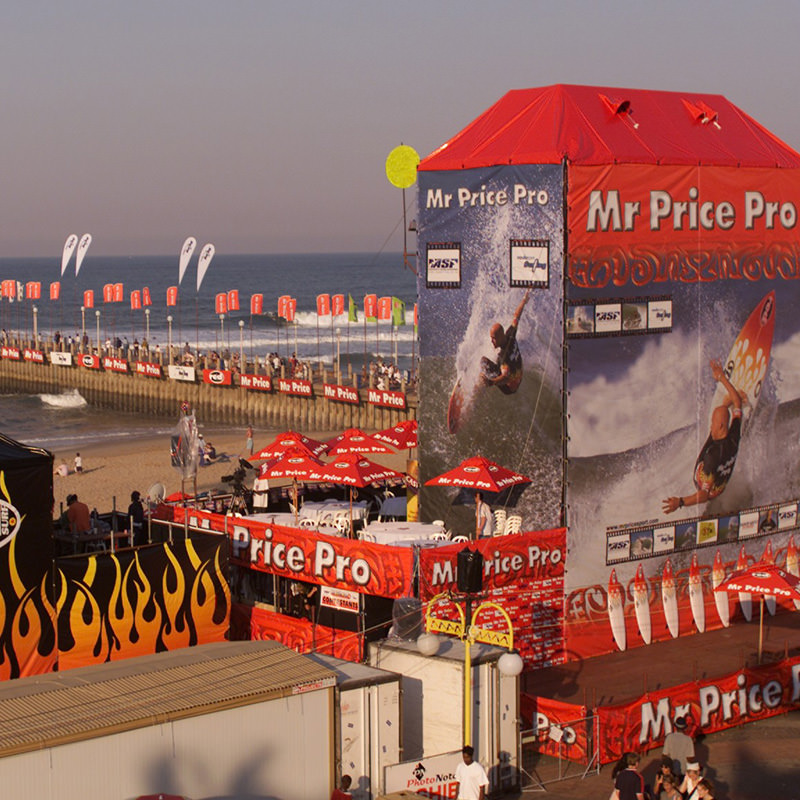 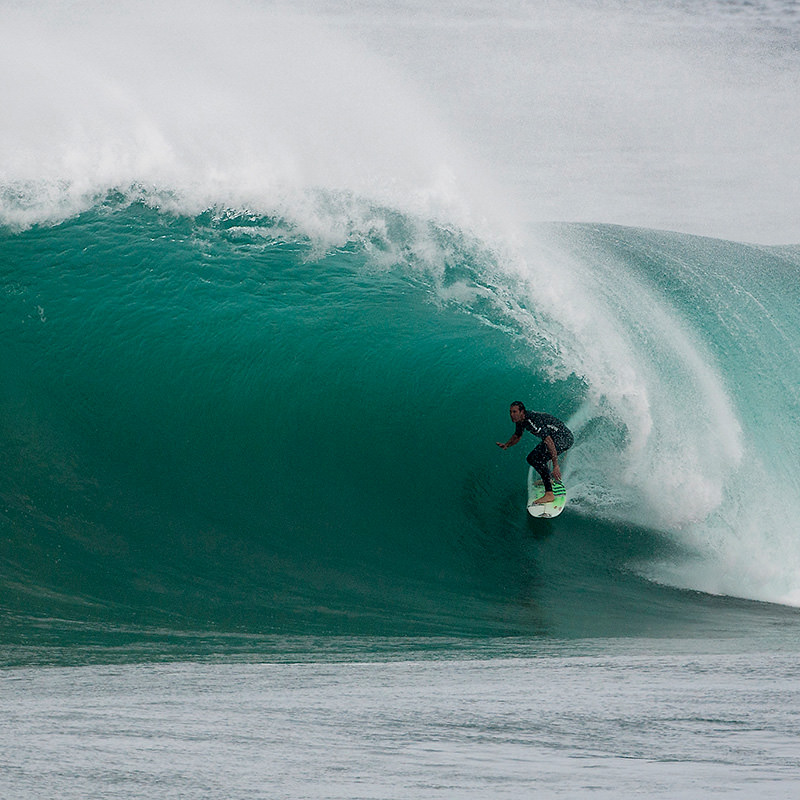 The move paid off immediately as the surfing world took notice when the waves were too big to complete the Women’s contest at Tinley Manor. With several of the competitors booked to depart the following day, the contest had to be cancelled. It has not been run again but will return as the Ballito Women’s Pro presented by Billabong, a QS1,000 rated event on the World Surf League (WSL, formerly the ASP) Qualifying Series (QS) in 2015.

KZN local Jordy Smith became just the third South African winner of the men’s event in 2010 and the eyes of the surfing world were again focused on Mr Price Pro Ballito in 2011 when perfect three to four metre waves provided the ideal canvas for spectacular surfing.

As the event expanded in stature and size, adding an extreme sports component, and a Coastal Living festival, the surfing contest upgraded to become one of the 10 Prime rated events on the ASP calendar with a whopping US $250 000 (then R1.67 million) prize-purse.

World-class fields and great waves produced wins for the USA based Gudauskas brothers, Tanner and Patrick; Ireland’s Glenn Hall; Australian Julian Wilson (who just prevented Jody Smith from clinching a second victory in 2013) and then Tim Reyes (USA) in 2014.

Meanwhile a strategic shift in marketing focus saw Mr Price divest from its sports properties in 2013 and invest in youth culture projects, including the 2014 music festival at the Mr Price Pro Ballito. However, that too fell away last year.

In a ground-breaking partnership between KwaDukuza Municipality, the WSL and new commercial partners Billabong, the Ballito Pro presented by Billabong was born, picking up the baton and continuing the legacy of the world’s longest running professional surfing event into its 47th year. Billabong held the title of The Ballito Pro’s presenting sponsor from 2015 until 2018 when the event celebrated its golden jubilee.

The end of another era emerged at the start of 2019 as Billabong passed on the sponsorship batton to global wetsuit and apparel giant O’Neill who will come alongside KwaDukuza to author an exciting new chapter for the world’s longest running professional surfing event and biggest beach festival in Africa, The Ballito Pro pres. By O’Neill.

“As the KwaDukuza Municipality we are once again jovial to be hosting the renowned Ballito Pro,” said the Mayor of KwaDukuza, Cllr Ricardo Mthembu. “We wish to thank O’Neill for taking the baton of being the new presenting sponsor – thank you for believing in this magnificent event, which has enormously succeeded in its task to being a nation building platform and a catalyst for introducing this sport to rural communities.” 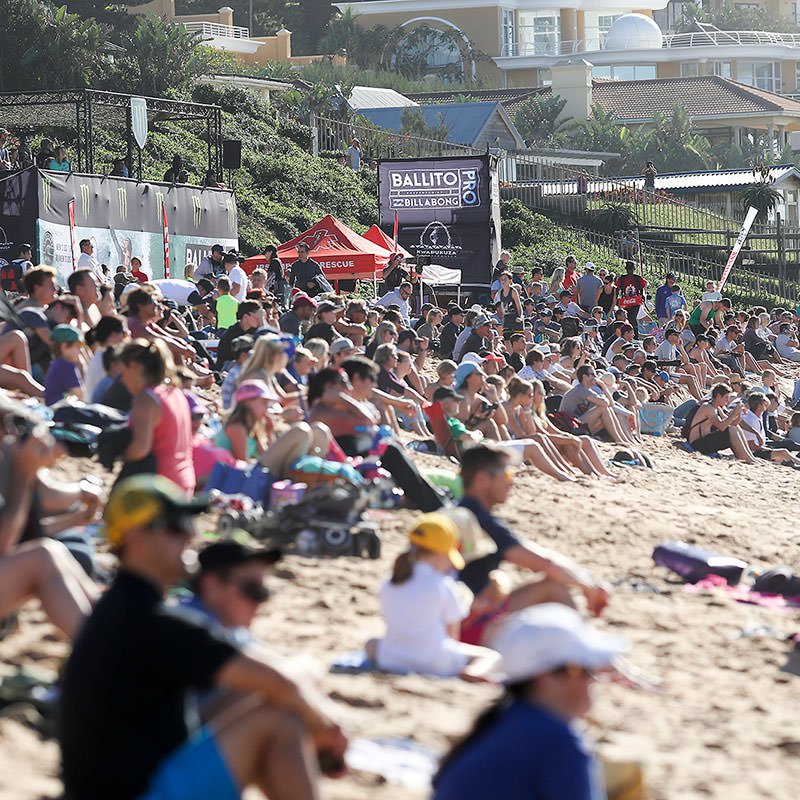 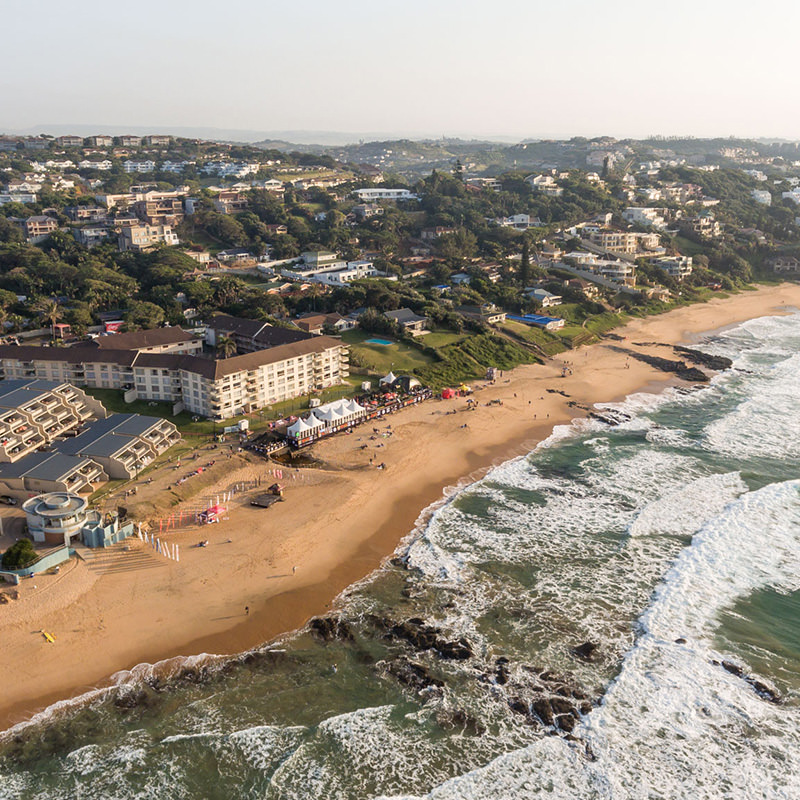 KwaDukuza – Stanger is situated inland from Blythedale, and the name epitomises the historical background of the area. The town is home to King Shaka’s memorial monument to commemorate his death. Kwadukuza – Stanger has a vibrant central business district with a distinct Eastern flavour catering for visitors and locals alike. Visits can be arranged to nearby Shaka sites, as well as the large sugar and paper mills on the edge of this town.For more information about this picturesque area, follow the link to their official website.