Sal Masekela’s epic African Surf Adventure at the Ballito Pro has served as a catalyst in connecting his past, present and future. South Africa has etched indelible memories in Sal’s mind, since his first visit in 1991 when he accompanied his father on a music tour, and his historic meetings with Nelson Mandela and Chief Mangosuthu Buthelezi. The son of legendary jazz great Hugh Masekela, Sal is the official event ambassador for the 2019 Ballito Pro presented by O’Neill. Born and bred in exile, Los Angeles-based Sal is an action sports presenter, journalist and musician.

Sal embarked on a whirlwind 24-hour trip of the KwaDukuza region early on Sunday morning, with a memorable meeting of Dr Albertina Luthuli, the daughter of Africa’s first Nobel Peace Prize winner Nkosi Albert Luthuli, at the home of her late father, which is now the Luthuli Museum.

The progeny of two most notable South African anti-apartheid struggle stalwarts delved into the depths of their iconic fathers’ contributions in shaping the history of this country. They also laid a wreath at the grave of Albert Luthuli.

“Salema Masekela’s visit to me is an historical one. The father of this young man, Hugh Masekela was very close to my own family and I feel highly emotional about this visit. I love Bra Hugh’s music. This is like a missing piece of the puzzle of my life,” said a sentimental Dr Luthuli.
After this unforgettable encounter, Sal officially opened the first community swimming pool at Shaka’s Head, a project undertaken by the KwaDukuza Municipality as part of its commitment to uplift local communities. The pool will be used by Ubuntu Learn to Surf and Swim Club to teach young children the essential life skill of swimming. Children from the club seized the opportunity to spend a few hours swimming and interacting with Sal.

The children will engage with Sal once again at the Ballito Pro on July 7, at the Sea Harvest Surfing South Africa Development Surf Day. Young surfers from KZN’s iLembe Surf Riders Association (ISRA), Ubuntu Learn to Surf and Swim Club, Sisonke Surf Club and Surfers Not Street Children (SNSC) will take to the waves in a fun tag team event. The event will showcase the development and transformation in the sport of surfing.

Drawing comparisons to his own childhood, Sal said there were no people of colour in his community who surfed. He encouraged the children, saying “This is one of the luckiest days of your lives. Own this pool like it is yours. Have fun. The skills that you learn at this pool, you will be able to take to the ocean!”

Sal was then whisked away along the King Shaka Heritage Route to the Umfolozi Big Five Game Reserve just two hours away, where he was treated to true South African hospitality. His brief visit included exploring King Shaka’s hunting grounds, traditional Zulu dancing by the local community, game drives and local cuisine. Five Zulu chiefs in the Umfolozi region have contributed their tribal land towards the now 30,000 hectare game reserve in an effort to uplift their communities through sustainable eco-tourism by protecting the local heritage, flora and fauna.

“The diversity of experiences and culture and opportunities in this region is just mind-boggling. From all the times I have spent in this country, I have learnt that South Africa will always surprise you. I always come with an open mind because the possibilities are unlimited,” said Sal.

“On this trip, I have felt like my dad was with us, because everything that I have done, are things that he would have loved, especially when it comes to South African heritage and traditions,” he added. “His biggest frustration was that people who came to visit South Africa didn’t get to experience South Africa’s diversity; that they usually came for one thing and that had less to do with people and culture and more to do with landscape and animals. If you experienced the two together it would mean endless combinations of joy and opportunities to celebrate the magic of what makes us human.”

Hugh Masekela’s wish was that people within South Africa have the opportunity to appreciate the magic and diversity of their country. He really pushed hard for South Africans to develop a sense of pride, to own their culture and realise that their home is as great as any other place in the world.

Sals’s African Surf Adventure will be a never-ending journey, weaving him into the tapestry of the Ballito Pro, the world’s oldest competitive surfing event. 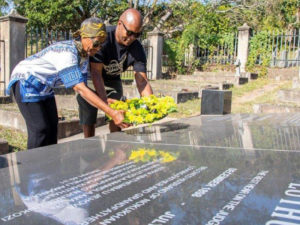 Dr Albertina Sisulu and Sal Masekela share special stories of their iconic fathers, as they lay a wreath upon the grave of Chief Albert Luthuli. Image © Pierre Tostee / Ballito Pro presented by O’Neill 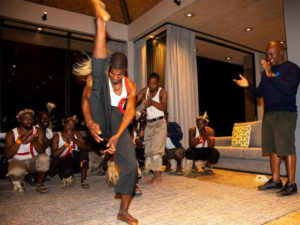 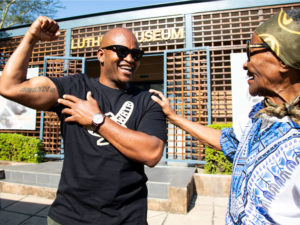